Captain Sheridan Stone sails the Atlantic as a privateer who harasses enemies of the British Crown. He’s not a pirate, but he’s close enough. He lives a life of adventure, danger, and violence, but he was wounded in a battle. It’s left him weary, and he’s thinking of retiring and returning to England. He might even be ready to marry and settle down, but his bride would have to be the perfect girl from the perfect family.

Miss Sophia Cantwell is a poor relative with no dowry or prospects. Her father was a dreamer and schemer, and she’s possessed of his wanderlust and grandiose ideas. She wishes she’d been born a man so she could shuck off society’s restrictions and have the exciting future she’s always envisioned for herself.

When Sheridan meets Sophia, there’s an instant attraction, but he’s an earl’s son, and he’s convinced himself that he will wed very high. Sophia has nothing he wants, so she could never be the bride he imagined. But she just might be the woman who could make him happy forever. 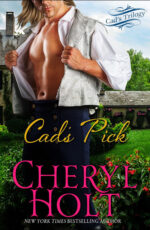 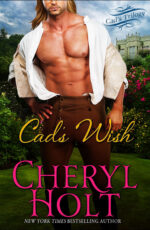 © Copyright 2021 Cheryl Holt | All Rights Reserved | Designed and Maintained by Day Agency
Back To Top
This website uses cookies to improve your experience. We'll assume you're ok with this, but you can opt-out if you wish.Accept Reject Read More
Privacy & Cookies Policy

This website uses cookies to improve your experience while you navigate through the website. Out of these, the cookies that are categorized as necessary are stored on your browser as they are essential for the working of basic functionalities of the website. We also use third-party cookies that help us analyze and understand how you use this website. These cookies will be stored in your browser only with your consent. You also have the option to opt-out of these cookies. But opting out of some of these cookies may affect your browsing experience.
Necessary Always Enabled

Any cookies that may not be particularly necessary for the website to function and is used specifically to collect user personal data via analytics, ads, other embedded contents are termed as non-necessary cookies. It is mandatory to procure user consent prior to running these cookies on your website.