CAN A ROGUE AND REBEL

CAPTAIN NICHOLAS PRICE has spent his life in the army, but he’s suddenly become Earl of Stafford. It’s a title and position he never sought or expected. He’s viewed as an interloper by his noble peers, and he’s determined to prove he belongs in their snooty company. He’s glommed onto the best of everything, and he’s flaunting his position, especially his rich, high-born fiancée and his ostentatious estate in the country.

BECOME THE MAN OF HER DREAMS?

MISS EMELINE WILSON is a feisty, over-educated spinster and one of the earl’s tenants. She’s suddenly found herself in dire straits, forced into penury by the earl’s cruel estate manager. She’s determined to confront the new earl over his callous treatment, and she insists he becomes a better man.

As they clash, tempers flare and passion sizzles. But as love begins to blossom, beautiful, but poverty-stricken Emeline could never be the bride Nicholas would pick for himself. What’s an engaged earl supposed to do when his plans for the future suddenly seem so wrong? 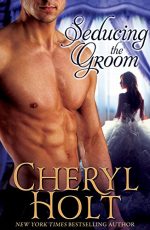